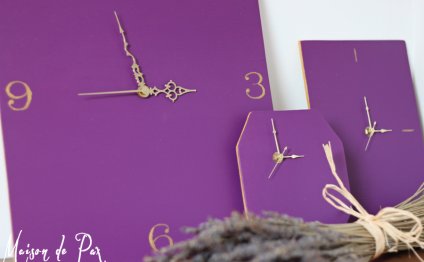 In many cases the complaint with a mechanical clock is that it stopped working after it was moved. This is usually from someone moving the clock without taking the pendulum off and this puts the clock out of beat. Out of beat is a term used in clock repair that basically means the clock is going tock-tick, tock-tick, or ticktock, ticktock instead of tick tock tick tock. It is sometimes corrected by putting a matchbook or Small piece of wood under one side of the clock case to make the tick and the tock evenly spaced. This can temporarily correct the problem and the clock runs fine. This method however is not as good as correcting the beat and having the clock run when it is truly straight and level.

This can be achieved on most clocks by slightly bending the verge one way or another. The verge is the only movement part that touches the pendulum and whacks the pendulum back and forth.

By bending or pushing this verge back into position, and then listening to the sound, you can make the clock go tick tock, tick tock rather than tock tick, tock tick or ticktock ticktock which means the clock is in beat. This method is the same for most mantle clocks, kitchen clocks, grandmother clocks, and grandfather clocks.

If the clock is now in beat, meaning the tick and the tock are evenly spaced, but then the clock stops after awhile, what now? Here are some other common ailments that are meant to be looked into before going into a cleaning procedure. Are the hands touching the dial, or each other? Bend the hands so they do not touch.

Is the pendulum touching another object during its swing? The Weight Driven Clocks pendulum cannot touch anything during its swing. It is commonly found in mantle clocks that the wrong pendulum bob has been put on the clock. Bobs are lost frequently like clock keys. If someone decides to replace the bob but hooks on a fatter one then the original, it may bump into the movement during its swing, even though the clock is level. Being off level is the most common reason for the pendulum to be blocked during its swing. If a clock is not level side to side and front to back, (or close) the bob may hit the case. It depends on the clock. All clocks are meant to be level and in beat from side to side, but not all clocks are meant to be perfectly level from front to back. The point is, to keep the pendulum totally free from obstructions because it uses its own weight and momentum to help keep the clock running. If it bumps anything, even slightly, then it loses some momentum and the clock will eventually stop.

If these things do not fix the clock then it would be safe to assume there is a general lack of power in the time train. It is time to give the Weight Driven Clocks clock a good cleaning and check it over for excessive wear. If the old oil dried up, then this would cause too much friction for the clock to run with the weights power. Clean out the old oil and check for excessive wear at the pivot holes. Pivot holes are explained in another section.