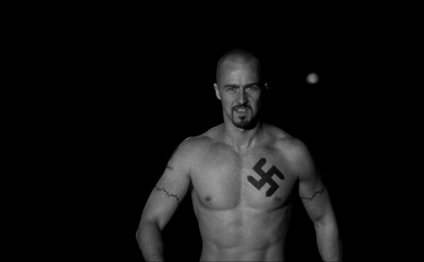 Tony Kaye made his feature directorial debut with this dramatic exploration into the roots of race hatred in America. In a shocking opening scene, teen Danny Vinyard (Edward Furlong) races to tell his older brother, neo-****** Derek (Edward Norton), about the young blacks breaking into his car in front of the house, whereupon Derek gets his gun and with no forethought shoots the youths in their tracks. Tried and convicted, Derek is sent away for three years in prison, where he acquires a different outlook as he contrasts white-power prisoners with black Lamont (Guy Torry), his prison laundry co-worker and eventual pal. Meanwhile, Danny, with a shaved head and a rebellious attitude, seems destined to follow in his big brother's footsteps. After Danny writes a favorable review of ******'s -Mein Kampf, black high-school principal Sweeney (Avery Brooks) puts Danny in his private "American History X" course and assigns him to do a paper about his older brother, who was a former student of Sweeney's. This serves to introduce flashbacks, with the film backtracking to illustrate Danny's account of Derek's life prior to the night of the shooting. Monochrome sequences of Derek leading a Venice, California gang are intercut with color footage of the mature Derek ending his past neo-****** associations and attempting to detour Danny away from the group led by white supremacist, Cameron (Stacy Keach), who once influenced Derek. Director Tony Kaye, with a background in TV commercials and music videos, filmed in L.A. beach communities. Rated R "for graphic brutal violence including ******, pervasive language, strong sexuality and nudity." ~ Bhob Stewart, Rovi