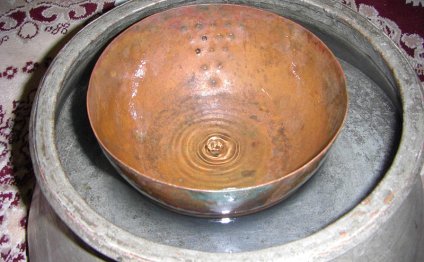 The Romans first used the sun's movement to measure the passage of time. Using this method they could precisely measure only sunrise, midday, and sunset, but they used the length of shadows to estimate other times of the day. The introduction of the sundial gave the Romans a new tool to better measure time. Travelers from Sicily brought the sundial to Rome in 263 B.C. and set it up in the Forum, where it became a popular meeting place. People came to check the time, to socialize, and "to see and to be seen." Other sundials were set up in public buildings or squares. Only the wealthy could afford to have one in their own homes and it quickly became a status symbol. Most people still just used the sun and its movements. The sundial enabled the Romans to divide the day into 12 equal parts, or hours. The hours became a way to mark time and meetings. Courts opened at about the third hour, for example, and lunch was at midday, the sixth hour. People would go home to eat a leisurely lunch and take a siesta, returning to work in a few hours. People in Rome today still leave work at 1:00 and return to work from 4:00 to 7:00.
The day was divided into ante meridiem (before midday) and post meridiem (after midday.) These divisions are still used today and abbreviated a.m. and p.m.

The sundial was not the only clock the Romans used. The water clock (clepsydra) was a container with a hole that water flowed out of to mark the passing of time. The inside of the container was marked with "hour" marks which the water passed by. Another variation used a floating rod that ascended to mark the time of day. The water flow began to be used to move hands, bells and even cuckoo birds. The water clock was used to control speakers' times in the Senate. When the water ran out, the speaker's time was up. In case a speech was interrupted, wax was used to stop the water momentarily. Two water clocks equaled about one hour. This water clock was also used to keep time in races. Like the sundial, only the rich could afford to have one.

It has always been difficult for humans to devise a calendar that works precisely because the solar year is not exactly 365 days long and the lunar month is not exactly 29 days. On the advice of an Alexandrian astronomer, Julius Caesar decided to correct this problem by adding a day to the calendar every fourth year. This made up for the 365.25 days of the regular year. This new calendar was introduced to the Romans on January 1, 45 B.C. After Caesar's death, the extra day was added too often at first, but this mistake was corrected and the calendar worked. It had now been changed from lunar to truly solar. We still use this calendar today for the most part, with a leap year every four years on February 29th. The Romans renamed the months of the year with their equivalents of what the Babylonians had named them. January was for Janus, a sky god who was worshipped as the god of all doors, gates, and entrances. Februarius was from februare, which means to expiate or purify. This may have been the month of purification because its end corrected the difference between the calendar and the natural year's length. Martius was named after the god of war. Aprilis may have been from Aphrodite or from the word aperio, which means to open, perhaps signifying the opening of buds and flowers. Maius is from Maia, the daughter of Atlas. Junius is from Juno. Some say these two months may be from the words majores (old) and juniores (young) signifying two age group. The sixth month was later renamed for Caesar and his calendar reforms, and August was renamed for his son, Augustus Octavian. September through December were named for their numerical order. The Romans marked special days in red, which may be the origin of our phrase "red letter days."

An instrument to interpret the Will of Heaven. Su Sung s clock As a result of this the Emperor Shen Tsung in about 1100…