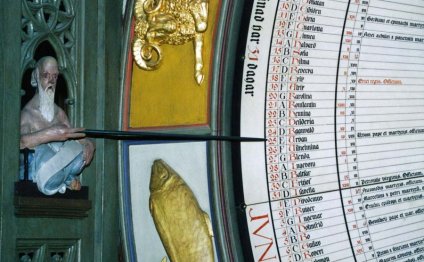 Imagine you had no watch, no mobile phone….basically, no way of telling the time. Further imagine that you are in the middle of a field with your plough and oxen, working on the lord’s desmesne – then how do you know what time it is? Yep, you’re in the Middle Ages and who knows whether it is 2.30pm or 4.15pm. Who knows what day it is. And frankly, who even knows what year it is!

Such were the vagaries of timekeeping for a medieval serf – so how they did do it? Well, two things to bear in mind. Religion and the seasons. Peasants knew when it was a holy day because….that’s where we get “holiday” from….and you know always know when your holidays are. Then there were the seasons – a time to sow seeds and a time to harvest crops. A time when animals breed and a time to slaughter them and salt the meat for winter storage.

How does this all translate in to practical timekeeping. I’ve read some fun stuff online around this subject. I’m happy to be informed whether a lot of this is total garbage or true. This website claims peasants carved sundials in to the bottom of their clogs – which they took off and held up to the sun to tell the time. I have never heard of that before! This site says that the first mechanical clock was invented in the late 13th century – so within the Templar era. But peasants would have had no access to clocks in our era – not as if you could take one in to the fields.

So let’s look at how peasants told the time. Winter stretched from Michaelmas in late September to Christmastide. And you were out sowing at that time. November was known as the blood month because you slaughtered the animals to keep you in meat during the cold months ahead. Of course there were the 12 days of Christmas to cheer up the wintertime.

From the Epiphany to Easter Holy Week was the Spring when fields and gardens sprang back in to life and animals got down to some serious mating. Plough Monday was a strange ritual shortly after Epiphany where young lads dragged ploughs round the village asking for money. Candlemas in early February was when oats, barley and beans were sown.

Two weeks after Easter was Hocktide which stretched to Lammas in August. Hocktide was when the May Queen was crowned – undoubtedly a throwback to pre-Christian fertility rituals or worship of pagan goddesses that encouraged crops to grow. Midsummer was marked by the feast of St John the Baptist and on St John’s Eve in June, a wheel of fire might be rolled down the hill – another pagan hangover. Lammas to Michaelmas was harvest time.

Minecraft Tutorial: How To Build A Medieval Keep/Castle ...

Is it a battle to get your child to do something quickly? This visual countdown timer App was designed for my 2 year old…