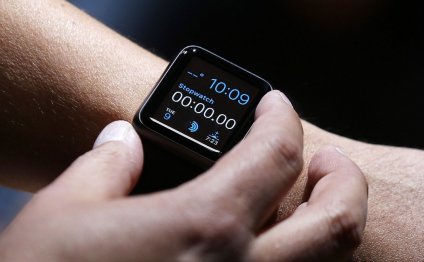 On the eve of the Apple Watch announcement no one was really sure what to expect. A concerned watch industry insider had called me a few days earlier and asked what I thought. His bosses were concerned, but not overly so, and he wanted some details. No one had any idea what the thing would look like but his bosses wanted some intel. I had none to give. 

The night before the launch I asked a friend who had insider knowledge about the product. I posited that the watch would be something you wore on one wrist and that I could wear my beloved mechanicals – my massive Bell & Ross, my Speedmaster Mark II, and my world timer Jaeger-LeCoultre – on my other wrist. I’d be a little like Nicolas Hayek, the beloved CEO of the Swatch Group, now deceased, who used to wear all of this sub-brands’ watches on both wrists.

My friend shook his head.

“You’ll wear this as your only watch, ” he said. He said it was a fashion item, something that would sell out immediately.

The announcement was a surprise to everyone. It was a typical “One More Thing…” moment. Tim Cook was excited to announce something to us. His language was folksy and calm. Then the video started. It was Kubrikian – the earth cresting into sunlight, city lights winking out as the sun rose above the wilderness. Off to the right something appeared – silver with a little round divot that slowly materialized into what looked like a crenelated crown. On the other side, another button, gently recessed. Something that said “STEEL” and then four little eyes that looked like the bug-peepers of an angry Extraterrestrial Vegetation Evaluator.

The music was organic with a touch of electro, a sound like dogs barking rolled in at the juncture featuring that same crown spinning back and forth and affecting the watch screen. Were those icons? Were those apps? Was this a watch or something for future humans to ingest before drifting into CryoSleep?

It’s a watch. More scenes of the technology. The Earth motif is forgotten as the watch takes center stage. There’s the band, there’s the bracelet. There’s a little icon that brings up a timer. There are ways to communicate with friends with touch and doodles. This is the new Earth, the new heavenly body born out of the darkness that lands in a white room as an unseen hand actuates function after function – a rose blooming under a clock, a step meter spiraling into view, Mickey Mouse tapping his toe jauntily. My god, it’s full of stars.

It was enough to make a fanboy ravenous. For me it cemented the idea that this was the rebirth of the watch and Switzerland, that longtime citadel of tradition and commerce, was lost. I posited — and still posit today — that if anyone is going to bring back watch wearing, it will be Apple, and that the Apple Watch will replace the traditional quartz fashion watch on wrists around the world in all different countries and across demographics.

After seeing the Apple Watch, after understanding its capabilities and connecting the iOS dots, it was clear that this was more than a sports band. It was a watch, designed as a fashion item as well as a tool. It was a timepiece second, a communications system first, and it was clear there was interest in many camps, from those who had not worn a watch in years, the so-called smartphone generation, to folks entrenched in the mechanicals industry.

And as a watch lover, I’m worried. On the eve of the Apple Watch launch, I’m increasingly convinced that this will replace my mechanicals in many cases. It’s a hard thing to for me to say, personally, and it’s a hard thing for fans of mechanical watches to accept. However, as a mass phenomenon and an engine for societal change, we’re going to see the return of the wristwatch and none of those timepieces will come from Switzerland. They will come from China via Cupertino and the implications on the watch industry will be enormous.

If the Apple Watch fails – and it won’t – the Fossils and Calvin Kleins and Burberrys of the watch world have nothing to fear. If it succeeds, there will be a massive shake-up of the sort and scale not seen since the quartz crisis of 1979.

But first let’s look at where wristwatches began – and where they are going.

The first wristwatch, a small silver-cased timepiece with blued hands and a ribbon band, was built on a whim. In 1810 Napoleon’s sister, Caroline Murat, requested a watch that could be worn on a thin band of hair and gold. Breguet, a grandmaster watchmaker then fallen on hard times, was hungry for the lucrative commission and built a surprisingly small minute repeater – a watch that chimes the time – in about two years. Murat, the Queen of Naples, bought many more Breguet’s but all of them were pocket watches, a form that sustained the watchmaking industry until World War I. Men, after all, preferred pocket watches, calling wristwatches “wristlets” fit only for women.
 

By 1900, however, the utility of the pocket watch was waning. The attendant rough conditions during wartime and global exploration found many men fumbling with their candy-tin-sized pocket watches under hard conditions. Sailors began wearing wristwatches on board and, as the first bombs burst over WWI trenches, Hamilton began building the first mass produced wristwatches for a generation of young Americans. “The most reliable timekeeper in the World for Gentlemen going on Active Service or for rough wear, ” went one British wristwatch ad. A decade later and the wristwatch was ubiquitous, the the mechanical, ticking equivalent of a smartphone.

The brands we know and love today – Timex, Rolex, Omega, Brietling – got their start as mass-market products. A $150 Rolex, in 1957, was an expensive watch for the time – about $1, 200 in today’s money – but it wasn’t unattainable. Timexes were $12 and took a licking while Swiss watches weren’t that much more expensive. When everything had to be mechanical there was no specific benefit Swiss craftsmanship or design and business was good for decades.

Why the Luxury Wrist Watch Industry is DOOMED!

REUTERS/Denis BalibouseA far cry from Apple s Watch.Apple has officially unveiled its long-awaited Watch, and while some…

In the ever changing technology of the 21st century, watch manufacturers are expanding their horizons. If you ve been to…