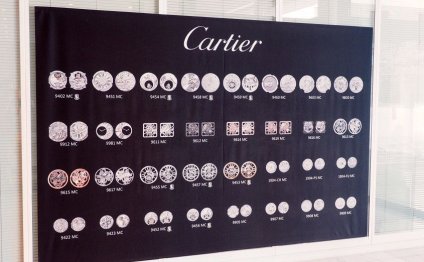 One of the oldest jewelers in the world, catering to the whims of royalty and movie stars alike, Cartier enjoys a reputation for selling only the finest quality jewelry, watches, and accessories. Nowhere is this philosophy more in evidence than Cartier's highly diverse line of wristwatches, many of which are the most recognizable designs on the planet. From the Tank or Pasha Cartier watch models, to the finest bejeweled creations for women, there is literally a Cartier watch for everyone, at almost every price point.

Cartier was founded in Paris by Louis-Francois Cartier, son of a powder horn maker. The year was 1847; just four short years later, Napoleon III came to power and through Countess Nieuwerkerke, the young Cartier was able to become a supplier to the court, selling Empress Eugenie a silver tea service in 1859. In the same year, Cartier rented quarters on the Boulevard des Italiens in what was then the most fashionable neighborhood in Paris. Cartier's jewelry was characterized by a light, airy touch, in contrast to the overly formal and overwrought ornaments of the period.

In 1874, Cartier's son Alfred took over the business and expanded it considerably. That included watches, which Louis-Francois had only dabbled in. In 1899, Alfred's son Louis Cartier entered the firm. Louis Cartier was a great lover of mechanical pocket watches and wanted the company to build its own branded Cartier watches.

In 1904, Louis Cartier met the Brazilian aviator, Alberto Santos-Dumont, who complained of the unreliability of pocket watches in flight. Cartier rose to the challenge, designing a flat wristwatch with a distinctive square bezel. This watch was not only a hit with Santos-Dumont, but also with Cartier's many clients. Thus, out of this timeless design, the "Santos" watch was born. Incredibly enough, this Cartier watch is still produced today in much the same form.

In 1907, Cartier signed a contract with Edmond Jaeger, who agreed to exclusively supply the movements for Cartier watches. By this time, Cartier had branches in London, New York and St. Petersburg and was quickly becoming one of the most successful watch companies in the world. The introduction of the Baignoire and Tortue Cartier watch models (both of which are still in production today) took place in 1912, followed by the Tank model's debut in 1917. In 1932, the watertight watch, made especially for the Pasha of Marrakesh, raised the bar even higher. Needless to say, the innovations, both in terms of design and technology, continued apace.

In the early 1920s, Cartier formed a joint company with Edward Jaeger (of the famed Jaeger-Le Coultre company) to produce movements solely for Cartier. Thus was the famed European watch & clock company born, although Cartier continued to use movements from other great makers. Cartier watches can be found with movements from Vacheron Constantin, Audemars-Piguet, Movado and Le Coultre.

It was also during this period that Cartier began adding its own reference numbers to the watches it sold, usually by stamping a four-digit code on the underside of a lug. In fact, many collectors refuse to accept a Cartier watch as original unless these numbers are present.

In 1942, Louis Cartier died and his successors were unable to continue without his artistic genius. As a result, the company became financially and artistically stagnant. It was only in 1972, when a group of investors took over the company and installed Alain Perrin as its CEO, that the company finally regained lost ground. Perrin, a former antique dealer, breathed new life into the Cartier watch brand. By developing the "Le Must" line, as well as creating new versions of classics such as the "Santos", Perrin managed to re-establish Cartier as an innovative and fashionable watchmaker.

Today, Cartier's best-sellers include the classic "Tank" watch ; the hot and fashionable "Tank Francaise", a distinctive sports watch similar in concept to the Santos; the "Pasha" watch, which has become a very fine watch for ladies; and the "Panther" watch, which features a beautiful bracelet available in 18K gold, stainless steel and gold, or stainless steel.

Needless to say, a Cartier watch is finished to very high standards. The cases and bracelets in particular are meticulously handcrafted and exude quality in every sense of the word. Yet in spite of the famous brand name and timeless designs, Cartier watches are available in a wide range of prices and styles.