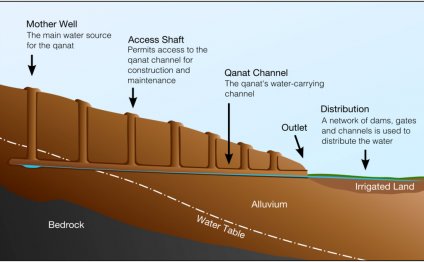 In striking contrast to the early Indus civilization and those of Sumer, Akkad, Babylonia, and Assyria in Mesopotamia, the great Egyptian civilization in the Nile River valley has sustained itself for some 5, 000 years without interruption. It lasted through warfare and conquest by the Persians, Greeks, Romans, Arabs, and Turks, as well as through pandemic disease that devastated its population. Yet its agricultural foundation remained intact. Only in more recent times has the sustainabililty of Egyptian agriculture come into question. In response to a 20-fold increase in its population over the last two centuries-from 3 million in the early 1800s to 66 million today-Egypt replaced its time-tested agriculture based on the Nile's natural flow rhythms with more intensified irrigation and flood management that required complete control of the river.

Compared with the flashy floods of the Tigris and the Euphrates, the historic Nile flood was much more benign, predictable, and timely. As is the case today, most of its flow originated from monsoon-type rains in the Ethiopian highlands. The remainder came from the upper watershed of the White Nile around Lake Victoria. With almost calendrical precision, the river began to rise in southern Egypt in early July, and it reached flood stage in the vicinity of Aswan by mid-August. The flood then surged northward, getting to the northern end of the valley about four to six week later.

At its peak, the flood would cover the entire floodplain to a depth of 1.5 meters. The waters would begin to recede in the south by early October, and by late November most of the valley was drained dry. Egyptian farmers then had before them well-watered fields that had been naturally fertilized by the rich silt carried down from Ethiopia's highlands and deposited on the floodplain as the water spread over it. They planted wheat and other crops just as the mild winter was beginning, and harvested them in mid-April to early May. By this time, the river's flow had diminished, sustained only by the more constant flow of the White Nile; the floodplain was completely dry. Then, magically to the ancients, the cycle started all over again. Even into modern times, every June 17th Egyptians celebrated the "'Night of the Drop, ' when the celestial tear fell and caused the Nile to rise."

The Egyptians practiced a form of water management called basin irrigation, a productive adaptation of the natural rise and fall of the river. They constructed a network of earthen banks, some parallel to the river and some perpendicular to it, that formed basins of various sizes. Regulated sluices would direct floodwater into a basin, where it would sit for a month or so until the soil was saturated. Then the remaining water would be drained off to a basin down-gradient or to a nearby canal, and the farmers of the drained plot would plant their crops.

The earliest evidence of water control in ancient Egypt is the famous historical relief of the mace head of Scorpion King which dates to around 3, 100 BC. It depicts one of the last predynastic kings, holding a hoe and ceremoniously cutting a ditch in a grid network. Besides attesting to the importance of these waterworks and the great ceremony attached to them, this picture confirms that Egyptians began practicing some form of water management for agriculture about 5, 000 years ago.

Egyptian irrigators did not experience many of the vexing problems that plagued (other historic) irrigation societies. The single season of planting did not overly deplete the soil, and fertility was naturally restored each year by the return of the silt-laden floodwaters. In some basins, farmers planted grains and nitrogen-fixing legumes in alternative years, which helped maintain the soil's productivity. Fallowing land every other year, which was essential in (areas like) Mesopotamia, was thus unnecessary in the Nile valley.

Neither was salinization a problem. The summer water table remained at least 3-4 meters below the surface in most basins, and the month or so of inundation prior to planting pushed whatever salts had accumulated in the upper soil layers down below the root zone. With salt buildup naturally checked and fertility constantly restored, Egyptian agriculturists enjoyed not only a productive system, but a sustainable one.

Water is... Ancient Egypt on the Murray