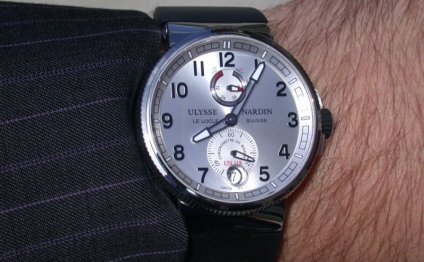 Finding the right watch is a quest. When a watch fits one’s lifestyle, like a glove to a hand, and not by some artificial marketing association, but the fit of real-world application, then a symbiosis ensues. What watch, for example, is the right watch for the boat owner?

Be he the captain of a flying tower fishing boat, of an open-air bow rider filled with eager skiers, of a sport cruiser complete with galley and overnight accommodations, of a true yacht for luxurious entertaining, or even in the rarified air of the seafaring mega-yacht bound for the Monaco harbor in time for the Formula Race, the right watch is essential. A dive watch will do, but if form follows function, what is the proper watch, other than a diver, for the captain of the ship? As summer beckons captains to the rivers, lakes and seas, Ulysse Nardin, a name synonymous with the pilot house, offers a watch that can move effortlessly from the swim deck to the yacht club, combining the essential elements of sport and dress while simultaneously benefiting from Ulysse Nardin’s DIAMonSIL technology and proven track record at a ship’s helm. Since we at Monochrome Watches first reported on the 2013 Ulysse Nardin Marine Chronometer Manufacture, we have wanted to wear one. In this review, we put the watch through the paces and found it to be more than ship-shape.

Ulysse Nardin’s interpretation of the Marine Chronometer has become a classic in its own right and is immediately recognizable as the flagship of the brand. You can make a game of finding the company logo, which is located on the crown, the strap badge, the enter of the clasp, and as part of an ornate rotor. Finally, the company name also appears on the dial and caseback edge, reminiscent of conspicuous branding from the 1980s. What is not immediately recognizable is the in-house movement. When paired with the rubber strap, much like the Southern Ocean, the watch is serious business and ready for rain, wind, and relentlessly big waves. From top-siders and teak decks to the yacht club dining room, this watch wears well in all maritime situations.

The small seconds display is a must for a watch daring to call itself a Marine Chronometer; the earliest models, used for navigation, were typified by a small seconds subdial, blued Breguet hands, and a large, white main dial. The small seconds subdial here is of a good size that aids visibility. The dial’s magnifying lens for the date is a handy feature. Also, the UN-118 movement has an automatic date corrector/quick set function, allowing for forwards or backwards setting of the date. Pairing a date complication with a marine chronometer — though the former was missing from those early models — is a useful update and this modernization of the genre has produced one of the watch’s main identifying features. On the Ulysse Nardin Marine Chronometer Manufacture, the power-reserve indicator sits symmetrically above the small seconds and below 12 o’clock. The watch has a vigorous power reserve of 60 hours, which the indicator measures in 12-hour segments. Full power is indicated in French with white text (“Haut”) and in English with red text (“Up.”) Below 12 hours of power, an increasing red, graduated band warns of needed rewinding with the French “Bas” in white type and English “Down” in red type.

As previously mentioned, classical marine chronometers had blued Breguet hands. Although our model features modern, skeletonized hands, we learned at Baselworld that, going forward, Ulysse Nardin’s Manufacture models will only have Breguet hands. Not only will you get a top-tier manufacture movement, but also a version closer to the genre’s traditions. Given that these skeletonized hands were our least favorite part of the watch, we enthusiastically applaud this change. Regardless, we wish the minute hand extended further to fit precisely beside the chapter ring instead of stopping short. The hour hand could also be longer. Beneath the AR-coated sapphire crystal is a dial that is full without being too busy. Our model’s blue color enhanced the aquatic theme and provided a nice contrast to the shine of the hands and the applied numerals. Above the date window, a red “1846, ” the year of the company’s founding, is a familiar design feature. The angled chapter ring has batons above the numerals and railroad tracks between.

The rubber strap is a must for the boat owner, allowing for transitions from deck to water and back, but the 100-meter water resistance means the watch is limited to going below the swim platform. Ulysse Nardin has reinvented the rubber strap for its Marine Chronometers, giving the watch yet another element to distinguish it. Instead of a single loop of rubber with a clasp, the strap has a titanium badge, giving the strap two additional pivot points and an added measure of style. Though the strap is cut to measure for the wrist, the clasp has additional sizing adjustments for length. There are three sets of holes on the upper clasp sides with two for expansion and two sets on the lower clasp with one for expansion. Two pushers release the lower element, and the upper element is pulled free manually.

When closing the clasp, the top element is secured first, then bottom, which feels slightly counter-intuitive. The three-element clasp, along with the badge, give the rubber strap an unmistakable Ulysse Nardin look.

The 43-mm fluted case, with its concave barrel, is a combination of steel and titanium, which means the watch is incredibly light on the wrist and will not impede quick action on the deck. The left side of the case has an affixed badge with the watch number in an elegant script. The steel bezel, the heaviest part of the case, is coin edged, which helps make the watch less top-heavy. The caseback is fastened by six screws, and has a sapphire crystal for viewing the movement. Built into the titanium case are two crown guards, giving the screw-down crown a nest of protection. Should fingers be damp, the blue, non-slip, rubberized coating of the crown edge is a subtle, yet functional, clue of water being this watch’s natural habitat.

Self-winding Caliber UN-118 has a patented escapement, oscillator, and hairspring. Ulysse Nardin’s initial partnership with (and eventual purchase of) Sigatec allowed it to perfect a DIAMonSIL escapement; DIAMonSIL is UN’s proprietary diamond-coated silicon material. When it came time to introduce this mechanical achievement, the company chose to introduce the movement in its Marine Chronometers. In 2006, the late Rolf Schnyder introduced the limited, in-house Calibre 160, and current CEO Patrik Hoffmann fully realized the dream in 2012 by releasing the UN-118 as Ulysse Nardin’s first in-house, full-production movement. We waxed eloquently about the technical marvels of this COSC-certified movement in our previous article, so now we can speak about the movement’s appearance. The beautiful rotor signals the care and attention that went into crafting the watch. It glides along its track cut into the bridges, aided in its travel by ball bearings. Two skeletonized anchors sit at either side of the blue logo badge at the center. The rotor moves easily, but its weight precludes constant spins. Circular Geneva waves travel across the bridges, and the finish of the movement is meticulous. No self-respecting skipper would wear a watch whose attention to detail didn’t at least match, if not surpass, his own.

In accordance with the long standing tradition of moniker elongation for high value, high exclusivity watches, the newest…