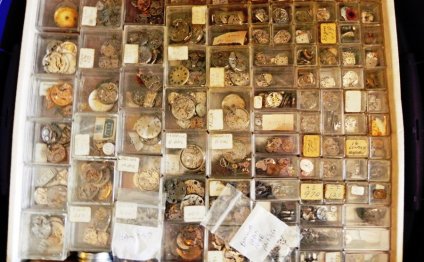 It has been said by others that the Accutron watch was developed by the Bulova Watch Company as a response to a perceived requirement by the American Army for a better time standard. I don't know whether that is true or not.

Bulova Technical Documentation states quite clearly that the watch was developed entirely as a consumer item, with no funding from any outside source. Still, it might be fair enough to imagine that the potential military applications hadn't gone unnoticed by Bulova management. The CEO of Bulova at the time was Omar Bradley, 5 Star General, US Army, Retired. All research undertaken was performed by Bulova engineers in their own labs.

Although the tuning fork concept had been had been previously demonstrated in clocks, they were never mass produced, let alone miniaturized to watch-size. Work began on the development of a Tuning Fork watch in 1953 by the engineer Max Hetzel.

The first prototype watches were produced in Switzerland in 1955. In 1959, Max Hetzel and William Bennett further developed the Bulova Accutron at the Bulova Headquarters in New York, based on Hetzel's previous research in Switzerland. In later years, it seemed that William Bennett tried to claim most of the credit for the invention of the Accutron, though he had a large part to play in the design. However, it was Max Hetzel who was the brains behind it.

Production of tuning fork Accutrons ceased in 1977, with Bulova directing their efforts to producing quartz watches. The name "Accutron" is still used by Bulova on some of their quartz watches, though the Bulova name is now owned by a company in Hong Kong. These watches bear no relationship at all to the Tuning Fork watches we are discussing here. It is a great shame that when the Bulova company was sold, a part of the advertising of the sale included footage of all the Accutron manufacturing machinery being destroyed, including the specially modified "Micron" brand hobbing machine used to make the index wheels.

To learn more about Max Hetzel, the inventor of the Bulova Accutron, and a more detailed history on the early development of the Accutron, I recommend you visit Barbara Young-Hetzel's site "ACCUTRON - Max Hetzel, the Man behind the Invention." Unfortunately, this website seems to have gone down. If it relocates or becomes available again, Ill link back to it.

Clock ticking for Obama to decide on Egypt aid