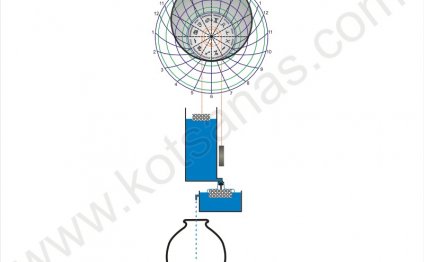 An attempt to resolve my own difficulties in understanding the most common form of Roman portable sundial. This piece started off with embarrassed incomprehension, moved to DIY and then prompted a re-investigation of the dial's geometry. While intended primarily to help anyone else suffering the same puzzlement, it did lead to some genuinely historical reflections on the significance of the dial.

The image shows a Roman portable sundial in the collection of the Museum of the History of Science, Oxford (inv. 51358). It is one of several Roman and Byzantine examples of this type of vertical dial to survive.

I was directed to these dials by a research visit to the collection at Oxford by two classicists. My academic visitors may not have realised the depth of my own surprise when I couldn’t provide a satisfactory explanation of the dial’s operation. It is normally possible to grasp the workings of a dial on the hoof, because it conforms to the familiar geometry of the sun’s apparent motion. Moreover, this dial is compact and neatly executed: surely it should be straightforward in operation? But while it would clearly indicate midday when correctly arranged for both latitude and date, beyond this it was confusing. While I could see roughly how it worked in the morning, its afternoon configuration appeared to be downright wrong, clashing with the geometry of the celestial sphere.

There is a literature on these dials. Frederick Stebbins, ‘A Roman Sun-Dial’, Journal of the Royal Astronomical Society of Canada, 52 (1958), 250-4 specifically focuses on the Oxford example as an example of the general type. A more recent and comprehensive treatment has been given by Michael Wright: ‘Greek and Roman Portable Sundials: An Ancient Essay in Approximation’, Archive for History of Exact Sciences, 55 (2000) 177–187 (available online to SpringerLink subscribers). Wright summarises the historical evidence and gives a clear and detailed mathematical exposition of the dial’s form, particularly highlighting its remarkable and distinctive character. Whereas all standard dials are (at least in principle) exact, this form is necessarily approximate.