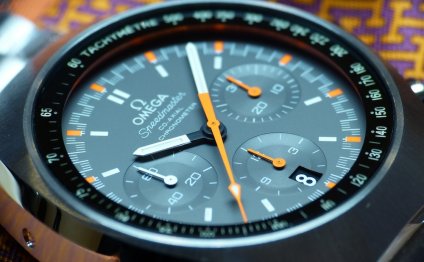 The success of the Speedmaster Dark Side Of The Moon watch (reviewed here) is no joke. Omega is perhaps 12 months or more backed up with production and many major Omega retailers have a waiting list of a few dozen people. Even Omega employees who want to purchase one must wait a long time before getting one. I've spoken to retailers who feel "lucky" to have received three Dark Side Of The Moon pieces since its debut over one year ago. It is thus both surprising and not surprising that the year following the all black-cased ceramic Omega Speedmaster Omega would follow up with something new.

While the Omega Speedmaster Grey Side Of The Moon (previously known as the Lunar Dust) is ceramic, it is not black and has a platinum colored dial. In fact, the dial isn't just colored platinum, it is actually plated with platinum. Together with gray alligator strap it makes for a unique and new sexy Omega Speedmaster style that we love.

Unlike the easy good looks of the black Dark Side Of The Moon, this new version has some more distinctive coloring. Perhaps that also explains why it has less immediate appeal, but continues to grow on me the more I think about it. In a way, the unique dial and color of the case makes it even more novel than the Omega Speedmaster Dark Side Of The Moon.

The ceramic case on the Grey Side Of The Moon reminds me of Chanel's Chromatic ceramic material–though the two are distinct. Omega does not yet have a specific name for the ceramic, but I have encouraged them to come up with one. The case is a deep, highly polished gray similar in tone to tungsten. The way it is produced is quite interesting actually, and surprisingly it starts out as a white ceramic case.