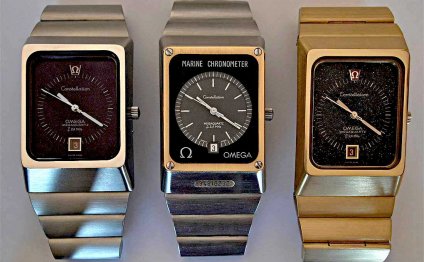 I have seen on numerous occasions people incorrectly identify a Omega 2.4MHz Megaquartz as the " Marine Chronometer". I have compiled a background information to help TimeZoner's correctly ID this production watch.

OK from the Omega site .

Developed by OMEGA in collaboration with the Battele Institute of Geneva, the first prototypes (cal. 1500) were presented at the Basel Fair in 1970.

It was first introduced on the market in 1974 (calibre 1510). Its unmatched precision of one second a month is around 10 times superior to that of an ordinary quartz watch.

This precision results from a specially designed tiny disc-shaped resonator, sealed in a capsule, which vibrates at the incredible rate of 2, 359, 296 times a second ! The high frequency earned one version, calibre 1511, the title of Marine Chronometer from the astronomic and chronometric observatory of Neuchatel - a unique award.

After 63 days of rigorous testing, the mean variation rate was no more than 2 thousandths of a second per day ! In addition, the Megaquartz 2400 was the first watch equipped with a time-zone-and-second-adjustment device for changing the hour without affecting the minutes or the seconds, for fine second adjustment and for synchronizing the seconds with an official time signal. Thus, for the first time in watchmaking history, the seconds were given their full importance.

Accurate enough... But what is not stated on the Omega web site is :

Only two 151x calibers were used in the Marine chronometer 2.4 MHz...

The only (production) model Omega made as a "Marine Chronometer" 2.4 MHz is a steel watch with a 14k yellow gold bezel and it will be signed "MARINE CHRONOMETER" across the top of the black dial and a 14k gold inset with the movement serial number is also on the sloping steel side of the case. In the photo below (also taken at the Omega Museum) the white dial watch was one of the prototypes presented at the 1970 Basel Fair with caliber 1500 also known as the "Elephant". The Marine Chronometer that is directly to the left the the sign (w/ ID tag 173) has a case reference (circa 1974) ST 398.0836 with caliber 1511 movement. The other Marine chronometer that is directly to the right of the Prototype has a case ref of ST398.0832 and uses the later caliber 1516 movement (circa 1976).

Just to recap... if you see either a solid gold or Steel only with a steel bezel 2.4Mhz wristwatch its not a Marine Chronometer and it was not certified as one. It will keep great time and its still a nice watch but your not buying the "Marine Chronometer". Then again you might come across one of the while dial odd case shape prototypes which would be a great watch to have.

I hope in the future that fewer people are led astray with regards to put-together Marine Chronometre's. I hope I get fewer heartbreaking emails saying that they just bought a gold 2.4 MHz marine chronometer.

Ulysse Nardin was born in Le Locle, Switzerland in 1823. Following in his father s footsteps, he trained as a remonteur…

In accordance with the long standing tradition of moniker elongation for high value, high exclusivity watches, the newest…