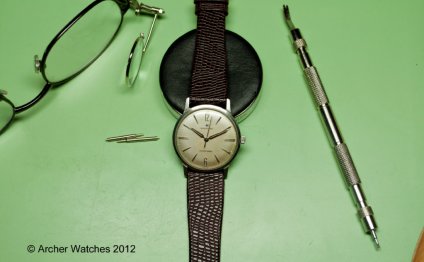 Hamilton watches are relatively easier to identify than the products of many other manufacturers. While there’s no magical formula for quickly identifying Hamilton watches, identification is simplified significantly by the fact that Hamilton named their models and, for the most part, stuck to unique names. The existence of a consistent naming schema makes your job much easier, but by no means does all the work for you.

Within each named model there were variations, typically in one (or more) of four areas:

Put that all together, and the result is that some models were available in numerous variations. So, though the watches may look different at a glance, they are in fact just variations of the same model.

Identification of a watch is a process, typically done as follows:

We look at each of these issues, below.

Is it really a Hamilton?

Until the late 1960s, all Hamiltons are marked clearly on the dial with the word “Hamilton.” In the late 60s and thereafter, a few models reduced the brand mark to the Hamilton “H” logo, but the mark still always appeared on the dial. The only exceptions to this are the related or subsidiary brands, like Illinois (discussed further on the “About Hamilton” page).

The case back can also provide insight into the manufacturer. The inside of the case back will typically be marked with the name “Hamilton”; the exterior of some case backs are also marked (particularly with models after the mid-1960s).

Signed crowns can also be useful. The presence of a signed crown will add another piece to the puzzle. (Note that Hamilton did not sign crowns with the Hamilton “H” until the 1950s, so you should not be seeing a signed crown on a pre-War model).

When it comes to identifying the model of a particular Hamilton, the bottom line is: It’s all about the case — movements don’t determine model, case designs do. The key to the identification process is to pay attention to details. All watches of a particular model had the same case style (though the material may vary, i.e., yellow gold vs. coral gold). Pay close attention to things like the shape of the shape of the lugs, or the lines (or lack thereof) on the case. To a lesser extent, dial features, like the placement of the second hand and the shape of the sub-seconds (if any), are also very useful indicators.

These resources represent many man-hours of work and are invaluable to Hamilton afficionados.

Establishing the vintage of your movement can help you to narrow things down to a particular range of years, though it is significantly less reliable. Movements might have been changed during the life of the watch, and Hamilton was known to use earlier movements in later watches (the WWII Cushion being a prime example, where mid-1920s movements were placed in 1940s watches!). Movement serial numbers are documented and can help you with your search — particularly if you are trying to figure out if the correct movement is matched to a particular case. The production dates for movements during Hamilton’s golden years are widely agreed upon. The table at left shows the years each of the movements were produced (up to the 1960s).