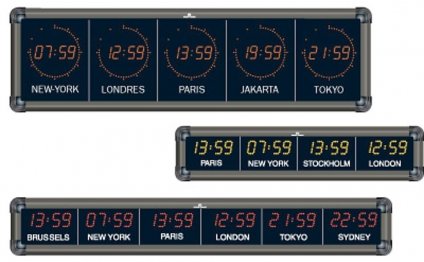 Who invented the digital Clock?

One of the past century’s most revolutionary changes in the world of timepieces was the coming of digital clocks and wrist watches.

Each type of digital timepiece (clocks and wrist watches) has a history; this blog post will be dedicated to both of them.

Perhaps one of the earliest styles of clocks that influenced the first true digital timepieces were Plato clocks. These pieces were small cylindrical-shaped objects, similar to a lantern. Inside the glass display were small digital cards with numbers printed on them, which flipped as time passed. The spring-wound Plato clocks were introduced at the St. Louis World Fair in 1904, produced by Ansonia Clock Company. Eugene Fitch of New York patented the clock design in 1903.

The original emergence of digital timepieces is surrounded by some controversy.

The first truly digital wrist watch surfaced in 1972, made by American timepiece manufacturer Hamilton Watch Company. According to Answerbag, the Pulsar wrist watch was made of 18-carat gold, costing $2, 100. Time was shown by pressing a button on the side of the device, after which an LED showed a glowing red display of the time in digital numbers. In their article “History of the Digital Watch, ” the BBC notes that Hamilton Watch Company also designed a digital clock prior to this in 1968, which appeared in the movie “2001: A Space Odyssey, ” made by Stanley Kubrick. This clock was meant to give a hint to viewers of the coming revolutionary digital timepieces and spark curiosity. The digital watch was especially popular; by 1975, more than 80 types were on the market, giving its analog competitor a detrimental blow.

By the early 1980s, the BBC notes that Japan began concentration on further development of digital timepieces. Digital watches could display the time and date by this time – also stopwatch features were becoming popular. Smaller digital alarm clocks became common. Powered by electricity, they were usually reliable except for one problem: when the power went out, even for a second, the clocks would reset themselves. Clocks with a backup battery source were later introduced on the market. According to Wikipedia, digital clocks became standard in automobiles during the 1980s. Before this time, the standard was a circular or square-shaped analog clock with unnumbered markings indicating the 12 points on a traditional clock face. Digital display clocks today are far more advanced, with more elaborate models able to display temperature, the date and more defined fragments of time. Some special types of clocks, such as Atomic Clocks, also commonly use digital displays.